On the Corner of Love and Hate

For fans of Lauren Layne and Kristan Higgins comes a delightfully “fun bit of fluffy entertainment” (Publishers Weekly) in the first book of a charming new series, in which a young woman is forced to help her old friend revamp his image for the upcoming mayoral elections...and discovers that she might not be as immune to his charms as she once thought.

When Emmanuelle Peroni’s father—and current mayor of Hope Lake, Pennsylvania—suggests she help with Cooper Endicott’s campaign, she’s horrified. Cooper, one of her (former) oldest friends, drives her crazy in every way possible. But he’s also her father’s protégé, so Emma reluctantly launches her plan to help him win the local election.

It’s not as easy as it looks. Cooper’s colorful love life is the sticking point for many voters, and his opponent is digging up everything he can from his past. It seems that every time Emma puts out the flames from one scandal, another one flares up. Emma knows that if Cooper wants to win, he needs to keep his nose clean. The only problem? She might just be falling in love with the one person she promised never to pursue: the mayoral candidate himself.

A perfect blend of humor and heart, On the Corner of Love and Hate is the first in a new series from USA TODAY bestselling author Nina Bocci. 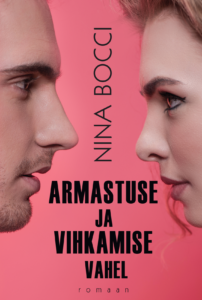 Nina Bocci is a USA Today bestselling novelist that loves reading and writing about swoony, relatable heroes and smart, witty heroines. If it’s set in a small town, even better. If you’re looking for the shiniest lipgloss, poke her on Twitter or Facebook to ask! New fave: Charlotte Tilbury